At least 13 people have been injured after a passenger bus veered off the road and plunged down an embankment near Biggar in South Lanarkshire. 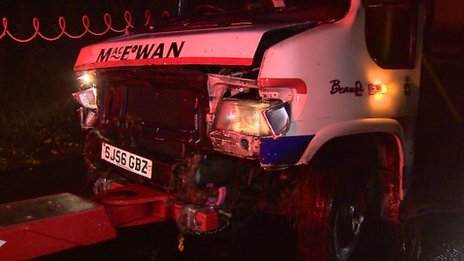 The accident occurred at approximately 8.30 pm on Wednesday evening, when the 30 seater coach owned by a Dumfries partner company, McEwans left the road and fell 20 feet down an embankment. According to a spokesperson for the Stratchclyde fire department, the bus was in a perilous position halfway up the embankment when the emergency services arrived to rescue the injured.

There were 13 people on the bus at the time of the incident, including the bus driver. All sustained minor injuries.

Of the 13 people who were injured, six were treated at the scene and cleared to go home, while a further seven were transported to local hospitals. A spokesperson for the Scottish Ambulance Service said that they transported the injured to Wishaw General and Edinburgh Royal Infirmary. According to hospital officials, none of the injuries sustained in the accident were life-threatening and it is thought that most of the injured will be released from hospital today.

Due to the dangerous position of the bus after the accident, emergency personnel including the fire department and paramedics had to be assisted by a specialized rescue team to free the victims from the wreckage and stabilize the position of the bus wreckage.

Strathclyde Fire and Rescue officials released a statement on Thursday morning saying that the swift response and coordinated rescue effort of those involved at the accident scene played a crucial role in ensuring that the injured passengers received optimal care and prevented further damage from occurring. All of the passengers from the bus were rescued from the wreckage within an hour.

“Crews worked in extreme conditions to stabilize the bus, make the situation safe and assess the casualties,” said the Strathclyde Fire and Rescue spokesperson. The injured were taken care of at the accident scene by paramedics from the Scottish Ambulance Service and those who were in need of further treatment were transported to hospital rapidly.

The cause of the accident is not yet clear. Police officials said that they will be conducting a thorough investigation into the incident and are expected to interview the bus driver and several passengers once they have been released from hospital. The results of the investigation into the accident are expected to take several weeks, said police.