Grammy award winning jazz musician Marcus Miller was injured and a bus driver killed when their tour bus crashed while Miller and his band were touring through Switzerland. 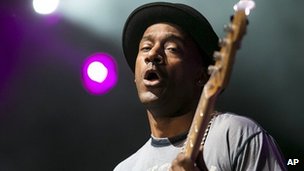 10 members of Miller’s band were also injured in the accident. According to police reports, the tour bus was travelling around a bend on the A2 motorway in Switzerland when it topped over. No other vehicles were involved in the accident.

Emergency medical personnel and fire and rescue officials arrived promptly at the scene of the accident. Unfortunately, however, the bus driver died of his injuries at the scene. The substitute driver, Miller himself and 10 members of the Marcus Miller Band were injured in the accident. However, according to authorities, none of the injuries are life-threatening. Police spokesperson Karl Egli said that 11 people were transported from the site of the accident to local hospitals where they are being treated for minor injuries. Egli had no further information on the status of the injured musicians.

The 53 year old jazz musician, who hails from New York City, is best known as a bassist. However he also plays the clarinet and the keyboard. Miller has played with well known artists such as Eric Clapton, Jay-Z and Miles Davis. He won a Grammy Award for best rhythm and blues song in 1991 after co-writing the Luther Vandross hit single Power of Love / Love Power. In 2001, Miller nabbed a second Grammy for his album M2, which won the best contemporary jazz album award.

The accident happened on Sunday afternoon in central Switzerland, near the town of Schattdorf. The band were on their way from Monaco to the town of Hengelo in the Netherlands. Hengelo was set to be the next stop on the band’s European tour to promote Miller’s new album, Renaissance. The band has not yet announced whether they will continue with their tour, however a spokesperson for the band said that the Hengelo show will more than likely be cancelled as the band members are still recovering from the incident.

The cause of the accident is not yet known, and details surrounding the accident remain scarce. Swiss police will be launching an investigation into the incident later this week, and encourage eye witnesses to come forward with any information about the accident. This is the second bus accident in this region of Switzerland this year. A bus crash claimed the lives of several adults and children on their way back from a ski trip in Belgium earlier this year.