Nine people have been killed and more than 20 others injured after a tour bus smashed through a guard rail and rolled down a steep embankment in Oregon on Sunday, said authorities. 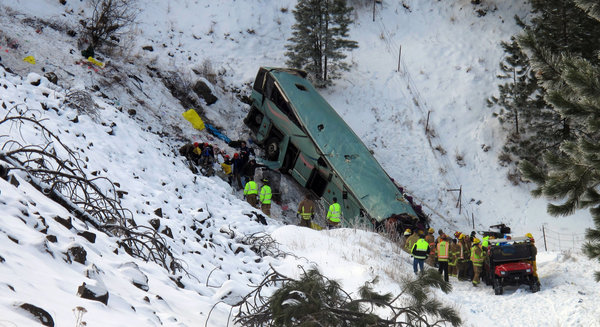 The accident occurred at around 10.30am on Sunday morning, on slippery roads in icy and snowy conditions. The driver of the tour bus, which was transporting approximately 40 people at the time, lost control on the ice-covered Interstate 84 in a rural part of eastern Oregon, according to Oregon police officials.

The accident occurred on a steep, winding downhill section of the road, when the driver crashed through the guardrail, rolling down a steep hill and landing on its wheels at the bottom of a snow covered slope.

More than 20 rescue workers arrived on the scene after receiving calls from other motorists on the highway. The rescue workers used ropes to traverse the snowy hill and to rescue survivors from the wreckage in the frigid weather conditions. The bus driver survived the accident, but sustained major injuries. The driver is expected to be questioned by police about the circumstances surrounding the accident once he has recovered from his injuries.

According to Lietenant Gregg Hastins, the bus crashed in a dangerous area of the state on the end of the Blue Mountains. That section of road is known to be particularly treacherous, and the state transport department had recently issued warnings to drivers of large vessels such as trucks and buses to be particularly careful due to the unpredictable weather conditions on the road.

26 passengers were transported by ambulance to St Anthony Hospital in Pendleton, where they are being treated for a range of injuries. Five of the injured were later transported from St Anthony to other local hospitals.

Survivors of the accident described the accident scene to the East Oregonian newspaper, saying that the bus swerved a number of times on the icy road before hitting into the guardrail and flipping over. The survivors described a terrifying scene of broken glass and dead and injured passengers pinned underneath their seats and inside the wreckage.

According to the Umatilla County Emergency Manager, Jack Remillard, the bus was operated by Mi Joo travel company based in Vancouver, Canada. The bus was travelling from Las Vegas back to Vancouver while on a tour of the Western US.

This bus is the second fatal accident on this section of road this week, after a 69 year old man died when his car overturned 30 miles from the site of the bus accident.