A woman has been killed in a tragic accident at the Fort Lauderdale Holly International Airport after she was struck by a charter bus, said local authorities. According to police, the woman tripped and fell into the path of the bus while she was getting into her vehicle at the airport. 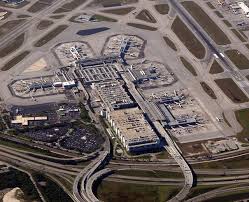 The accident scene was blocked off by yellow police tape, closing all four lanes of incoming traffic at Terminal 4 of the Fort Lauderdale-Hollywood International Airport on Saturday afternoon.

According to eye witness reports, the woman went to meet a passenger that was arriving from the airport. As she was returning back to her vehicle with the passenger, she tripped and fell into the road, directly in the path of an oncoming charter bus. There were 12 passengers on board the bus at the time, en route from the airport to Miami where the passengers were due to be taking a cruise. None of the people on board the bus were injured in the accident. It was later discovered that the passenger was the victim’s husband, who was returning home from a business trip.

The woman was in a Ford SUV that was parked in an active traffic lane close to the terminal. Emergency responders took just minutes to arrive on the scene, however the woman was declared dead. The accident is being investigated by the Broward Sheriff’s Office Homicide Unit, although no foul play is suspected. There were two other people in the Ford SUV, who witnessed the horrific accident.

Shocked airport staff had to deal with the aftermath of the accident, with passengers complaining about the traffic blocks caused by the closing off of the accident scene. The lanes were reopened at 6.30 pm, once officials had gathered evidence from the scene and the body of the victim was cleared.

The victim has been identified by police as 68 year old Cheryl A. Bazilius of Ft. Pierce. The incident is still under investigation by officials, and it is not yet clear whether any charges will be made.

In other bus accident news this week, 11 people were injured on Saturday in Brunswick, Virginia after a bus carrying 40 church members from Baltimore to Chester, South Carolina ran off the road. According to the bus driver, an animal ran into the road causing the driver to swerve to avoid hitting him, with the bus ending up in a ditch. None of the passengers were seriously injured.