Bus Accidents Kill Five in Belgium, Injure Others In Yosemite

Two major bus accidents this week have killed five people and injured scores of others, and has raised questions surrounding the safety of tour bus transportation.

1. Five people have been killed near the city of Antwerp in Belgium after their tour bus veered off a highway bridge and landed on its side. The driver of the tour bus, which was registered in Poland, appeared to lose control of the bus suddenly while the bus was travelling on an elevated section of the E34 highway near Antwerp. According to eye witness reports, the bus sailed through the barriers on the side of the highway and plunged six meters to the underlying road, landing on its side, at sunrise on the 14th of April, 2013. 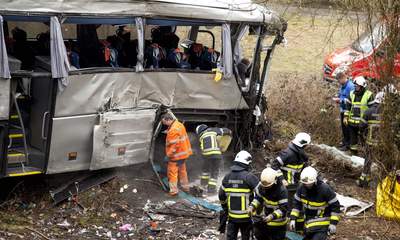 The bus was carrying 42 Russian teenagers on a tour from Volgograd in Russia to Paris, France. It has been confirmed that three Russian citizens and two Polish citizens were killed in the accident, although their identities have not yet been released to the press. The remaining 37 passengers and the bus driver all sustained injuries in the accident, ranging from severe to minor. The injured passengers were transported to local hospitals where they are receiving treatment. One passenger remains in a critical condition.

According to initial reports from police, the bus driver may have fallen asleep at the wheel. However a thorough investigation will be conducted into the cause of the accident in the following weeks. No other vehicles were involved in the accident.

2. In another tour bus accident this week, a tour bus carrying tourists on its way back from Yosemite National Park in California lost control and crashed into a tree on Highway 41, injuring all 16 passengers on board the bus at the time. Most of those who were injured were elderly.

The cause of the Yosemite bus accident has not yet been determined, but it is thought that the bus driver may have been speeding. The section of the road where the accident occurred is winding, and the speed limit drops to 35 miles per hour, said California Highway Patrol Offiver Scott Jobinger.

The bus driver has been identified as 49 year old Changefeng Liu, an employee of Seven Happiness Tour and Charter company. Liu has been working for the company for the last six years and has a clean safety record, according to a spokesperson for the company who made a statement to the media on Sunday.