1. An ambulance from the Chicago Fire Department was responding to a call when it and a school bus crashed. Two paramedics were injured, though not severely and were taken to Resurrection Hospital and Northwestern Memorial separately. The school bus driver was the only one on board and declined medical treatment, apparently having suffered no injuries. 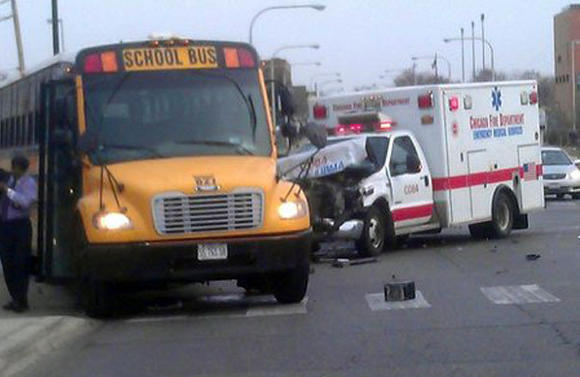 The ambulance / bus crash occurred on Saturday, April 6th at approximately 9:20 a.m. at the corner of Central and Grand Avenues in the neighborhood of Hanson Park, on the Northwest Side. According to Joseph Roccasalva, the Chicago Fire Department Chief, the team was on its way to West Grand with its siren on and emergency lights lit.

Jose Estrada, spokesman for the Chicago Police Department, said that they are investigating the cause of the crash.

2. On Friday, April 5th, a man driving a Jeep Wrangler crashed into another school bus about fifty miles north of Chicago in Wadsworth. The children and driver of the bus were taken to the hospital, but none sustained serious injuries. The drive of the Jeep, however, Philip Smith, age 62, from Beach Park, died in the bus crash and two of his passengers were rushed to the hospital via ambulance.

Some eye-witness reports claimed that the female bus driver ran a red light, but others contradicted that statement. Police continue to investigate how the crash occurred, according to Mark Curran Jr., the County Sheriff.

3. A Nigerian official reports that around thirty-six people were killed in southwestern Nigeria on the afternoon of Friday, April 5th, when a bus crashed into a gasoline tanker, causing the tanker to explode.

The tanker / bus crash occurred in the Nigerian state of Edo. Jonas Agwu, spokesman for the Federal Road Safety Corps, said that the resulting fire wasn’t put out for hours and that the death toll could be higher than originally thought. We do know that three people on the bus survived the crash, but their condition is unknown.

Despite its wealth from oil production, Nigeria still has some of the worst roads in West Africa. Large potholes and uneven paving, in conjunction with aggressive drivers, result in a more than average number of crashes. The World Health Organization reports that Nigeria boasts one of the highest death rates related to traffic accidents worldwide.

4. A charter bus flipped over on Friday, April 5th, on its way to Hampton University in North Carolina. Doval Watson was thrown from the bus and killed instantly. Theresa Watson, his wife, was injured, but not critically.

The driver of the bus reportedly lost control of the vehicle and has been charged with reckless driving.

The family asked for prayers in a statement to the press on Saturday.